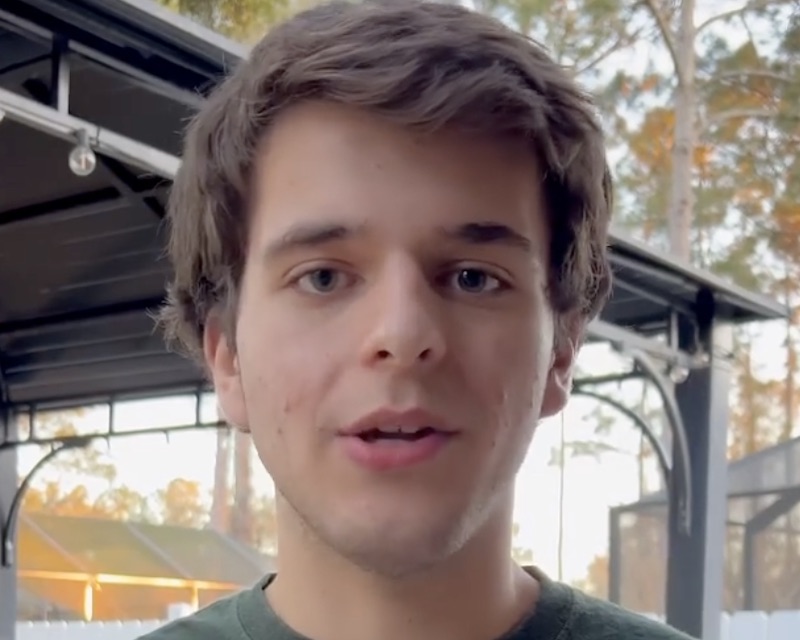 The Florida high school student who staged a strike to protest the state’s ‘parental rights’ bill, which critics call the ‘Don’t Say Gay’ bill, says he was suspended by school administrators, whom he accuses of trying to crack. on student protest and free speech rights.

Following the protest, Petocz said he was called into the principal’s office and was “disrespectful” and “openly defending the staff”. They suspended him until further notice “pending an investigation”.

Petocz says administrators suspended him for bringing and distributing about 200 Pride flags — purchased with his own money — to students to hold during the protest. An hour before the walkout – which was originally scheduled for noon but was pushed back to the morning – Principal Greg Schwartz pulled him aside and voiced his objections to the flags.

“”He told me that I would not be allowed to [distribute the flags]. He went further by questioning the intentions of our protest, asking if the pride flags were relevant to opposing the bill,” Petocz said. “I decided to go ahead and handed the flags over to other student organizers to pass out at the event.”

When students showed up at the school stadium for what was supposed to be a 15-minute protest, administrators attempted to confiscate some of the pride flags, prompting Petocz to ask his classmates to do not put the flags back. Administrators also attempted to have students leave after just seven of their allotted 15 minutes, threatening to discipline them if they did not return their Pride flags or return to class. The Daytona Beach Newspaper reports.

“The administration is trying to stop us!” cried Petocz. “Let’s say gay!” We will not remain silent!

But Jason Wheeler, a spokesperson for the Flagler County School District, defended the school’s actions and any consequences Petocz or others might face for their participation.

“I was there and the students were out of class for at least 20 minutes. Student leaders were advised that there were no flags prior to and at the start of the event to avoid undue security concerns and disruptions on campus,” Wheeler said. “The school administration has spoken with the event organizer on several occasions about expectations and parameters for students to participate in a peaceful and safe protest.”

Wheeler said the News-Journal this “[a]Any student who participates in a boycott, walkout, sit-in, strike or other similar disruptive action that interferes with the proper functioning of the school will be considered guilty of serious misconduct and will be subject to suspension or dismissal from school. He noted that school administrators from FPCHS and Matanzas High School — which has also been given the go-ahead for a walkout — have previously worked with students to organize protests that don’t interfere with the learning environment.

“It’s the same in this case,” Wheeler said. “District administrators this week worked with the principals of both high schools to establish an action plan to allow for the student protest, without disrupting other students who would rather not participate. In addition, they must consider the safety of the participating students. They then have the opportunity to return to their classrooms. If students showed up to class past the allotted time, then they would be subject to the Student Code of Conduct,” which means late or absent marks on their attendance records.

Teachers are not allowed to participate in demonstrations, walkouts or other demonstrations. And Flagler County specifically banned the press from being on either campus or interviewing students walking out of class during school hours, saying the reporters’ presence would “create a added pressure on our limited staff and administration on our campuses”.

The bill the students were protesting against has already passed the Florida House of Representatives and is making its way to the Senate, after which Governor Ron DeSantis (R) is expected to sign it. The measure seeks to prohibit school teaching or discussion of sexual orientation and gender identity in the “elementary years,” which is understood in Florida to mean kindergarten through third grade. After the fourth year, teaching should be “age and developmentally appropriate”.

The bill also requires teachers to inform parents of any decisions or actions taken by teachers or administrators that affect a child’s well-being, learning plan, and any counseling, guidance or any support he might need. Parents who are not informed of these decisions are entitled to take legal action for violation of their “parental rights”.

The bill’s sponsor, State Rep. Joe Harding (R-Williston), has often said opponents twist the bill, which is about making sure parents have a say in what is taught to their child and whether it is age appropriate. He says the legislation will not prohibit discussion of LGBTQ issues in high school classrooms. But critics say such a promise is hollow and cannot be guaranteed in practice, because teachers and administrators who fear prosecution – even if they are not breaking the law – will take preemptive action to silence any LGBTQ-related speech, lest it offend anyone.

Alysa Vidal, a 17-year-old student at Flagler Palm Coast High School who is a member of the LGBTQ community and participated in the school walkout, said nearly two dozen statewide protests — all organized or led by Petocz — are intended to show lawmakers that young people oppose the bill.

“As students, we don’t agree with that,” Vidal said. “It puts so many children at risk of abuse – mental or physical, emotional – that’s a problem.”

Vidal says she is out with her parents, but is worried about the safety of some of her friends and classmates who are not fully out yet, adding, “If this bill goes through legislation, I won’t. just don’t think it would be very safe for me or my friends.

Petocz, a frequent critic of the Flagler County School Board who runs a Twitter and Instagram group called Recall FCSB, which criticizes what he sees as “rampant bigotry and corruption within the Flagler County School Board,” said previously clashed with district officials for allegedly discriminating against LGBTQ students, and more recently, for book censorship when he pulled the book Not all boys are Bluea series of essays focusing on the experiences of author George Johnson growing up as a queer black man, on library shelves.

Other student activists have since started a petition on Change.org demanding that the school rescind the suspension. The petition has since garnered more than 3,800 signatures.

“Principal Schwartz gave explicit permission and approval to the organizers for the walkout to take place, despite cutting back on our time and changing location several times,” the petition reads. “Now, after aborting the walkout and shortening it much more than previously agreed, Schwartz has suspended Jack indefinitely ‘pending an investigation.'” The FPC administrator must have forgotten that the students have freedom of speech. This act of retaliation is utterly disgusting. We demand that Jack’s suspension be lifted immediately and that he receive a personal apology from Principal Schwartz.

As for Petocz, he seems to be taking his suspension head on, saying it won’t deter him from speaking out against laws he deems wrong.

“I have never been disciplined before and will continue to advocate for marginalized communities,” he said.