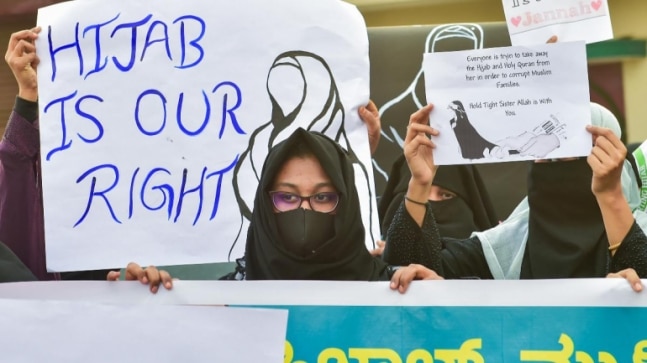 In the middle of a growing feud over wearing hijab in schools and colleges, a Muslim female student from Karnataka applied to the Supreme Court, asking for the cancellation of the state government order prohibit women from wearing the hijab or headscarf in an educational institution.

The petitioner stated that her basic rights have been violated with impunity as she was denied college entrance thus preventing her from attending her regular classes.

The petitioner challenged the order of the state government, dated February 5, under which the government of Karnataka, allegedly in the exercise of its powers under section 133(2) of the Act of Karnataka School Education 1993, directed college development committees to prescribe school/college uniform for students. The state government ordinance pointed out that wearing hijab is not protected by Article 25 of the Indian Constitution.

The Karnataka government has held that “garments that undermine equality, integrity and public order should not be worn”.

ALSO READ: Hijab Covers Your Head, Not Our Brains, Petitioner Says To Minister Of Education For K’taka, BC Nagesh

In the plea filed in the Supreme Court, the petitioner argued that something as innocuous as the wearing of the hijab by a Muslim student became a community problem of such magnitude that the state government had to shut down from schools and colleges until the weekend.

The plea further indicated that the question of a religious practice meeting the essentiality test was already pending consideration before a nine-judge panel of the court. She further added that a young Muslim girl pursuing her studies wearing a hijab/headscarf is not infringing any rights of anyone and is not campaigning against any interests of the state.

“Therefore, even the criterion of essentiality is wrongly invoked in the current facts”, asserted the petitioner.

The petitioner has sought to demonstrate that the Islamic practice of wearing the hijab/headscarf satisfies even this higher threshold of “essential religious practice”.

The plea sought an order from the Supreme Court, ordering the state government to allow the petitioner to attend classes wearing the hijab matching the color of the school uniform.

She also asked the court to pass an appropriate order directing the state government to take immediate criminal action against the hooligans who have disturbed public order in the state of Karnataka and threatened Muslim female students with consequences if they came to school with their hijab. .

She further called for the deployment of adequate police personnel around the colleges to prevent the occurrence of any untoward incident on the account.