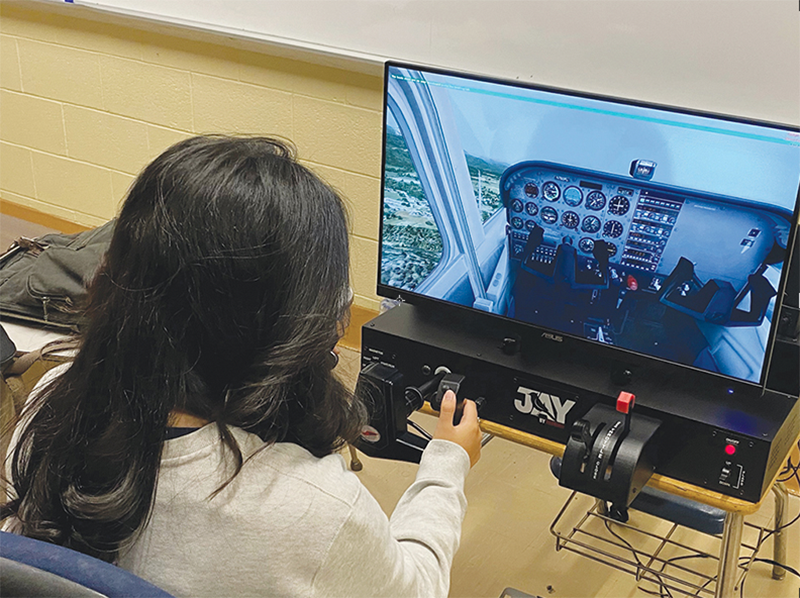 A select group of students at Belleville High School are aiming very high these days – as high as the sky, and possibly beyond.

As young “cadets” of the Aerospace Club, they learn to fly.

This school year, the Belleville School Board took a bold step by hiring the Eagle Fight Squadron, a non-profit flight school based in East Orange and founded in 1975 to encourage young people to develop related teaching and manual skills. to aviation.

BHS director Caleb Rhodes said the district offers the course twice a week as an after-school elective course with no credit. It is designed, he said, as a three-year pilot’s license program for those who successfully complete it.

The EFS provides instructors and equipment and runs actual flights, first with ground-directed drones, and later on planes from Essex County Airport to Caldwell.

Currently, Belleville has fewer than 10 students enrolled, but Schools Superintendent Richard Tomko said the program is one of many strategies the district has adopted to help children, who are not otherwise in tune with others. traditional educational approaches, to be successful.

As in the case of the district’s heavily sponsored cosmetology program, “Not only do students learn a trade, they graduate with a bachelor’s degree. [to fly], “he said.” Once it gets started, it should also be a success. “

Two other non-traditional initiatives that Tomko and his staff hope to implement are:

n A junior ROTC program inspired by successful operations at Clifton and Paterson that could ultimately lead to a career in the military. Currently, on average, 15-20 of BHS graduates pursue military options.

Depending on the outcome of the district’s application for admission to a military or navy-sponsored program, students could see marching orders by 2023, administrators said.

n An Academy of Law Enforcement, Fire Sciences and Public Safety which ideally would be linked to the state civil service which would schedule its test for uniformed personnel every three years, offering a future job opportunity. No date has been set for activation.

Meanwhile, for the aviation course, in addition to working as a commercial pilot, students could also embark on a career as an airline mechanic, for example, or turn their navigation skills into employment opportunities. in law enforcement, the entertainment industry, etc., Michael Chisolm, an EFS flight instructor assigned to Belleville, suggested.

While 11th grader Yanelli Taipe confessed that he’s still in the air to engage in aerospace as a future job prospect, freshman Nelson Ortiz was enthusiastic about the idea. to take off his nascent airline pilot career.

“I’ve never really seen myself in aviation,” Yanelli said, “but now I might consider it.”

Yanelli has a relative in the Air Force “but I never really paid attention”.

On the other hand, Nelson has listened to the idea of ​​theft since he was a child.

“I made airplane Legos when I was a kid,” he said. “I want to be a pilot and this is a good opportunity to learn.”

Last year, at age 14, he learned about the controls of a Cessna during a one-hour private lesson.

Instructor Chisolm, a former EFS with a degree in aviation management, said he and his partners were teaching children about factors such as weather, aerodynamics and the rules of the sky contained in the documents. FAA regulations before introducing them to the use of a drone and then to flight. simulator.

In the United States, to qualify for a pilot’s license, an application must be at least 17 years old, pass a written and practical test, and record at least 40 flight hours (day and night), but most applicants take 50 to 60 hours of training, said Chisolm. No weight restriction applies but, of course, the pilot must be able to sit in the operator’s seat.

Being color blind will not disqualify a candidate as long as they can distinguish the appropriate signals to know to safely fly an aircraft. The use of certain specified drugs, heart problems or a history of stroke may be disqualifying.

In a recent flight lesson, EFS instructor Stephaun Hill put students to the test on a computer that simulates a pilot-in-command, including a display screen, yoke, pedals and headphones.

Students go through a pre-flight checklist, listen to instructions from a simulated air traffic controller and the weather conditions before “take off” and climb to an altitude of 3,000 feet at a cruising speed of 130 knots per hour (or, about 150 MPH).

Hill reminds students that they need to consider, among other factors, the impact of headwinds when plotting their course and how this will affect their travel time and the amount of fuel needed.

As for the real deal at the airport, the students will likely board a single-engine Cessna 172 for their training flights, Hill said. Vigilance is crucial, he reminds the students, because “we are in one of the busiest airspaces in the world”.