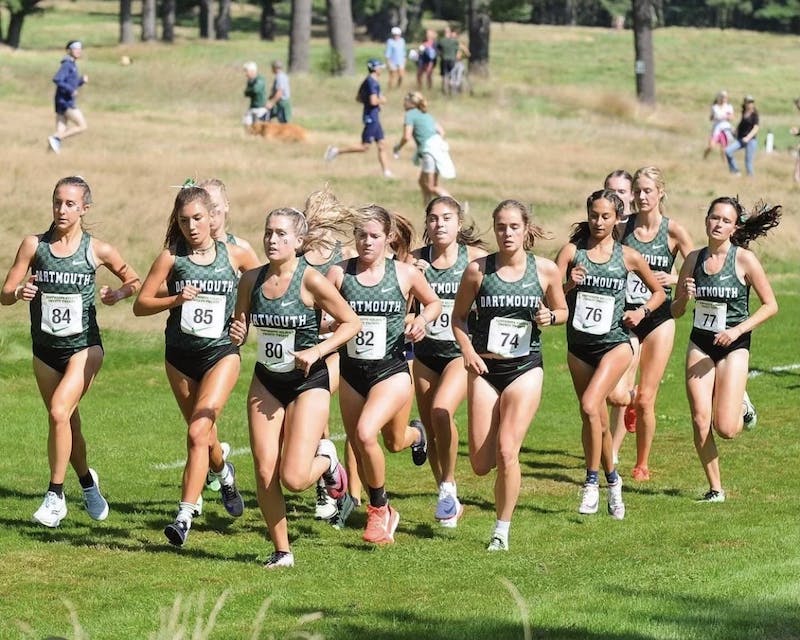 This article is featured in the Freshman 2022 special issue.

Student-athletes from Dartmouth’s cross country, football, women’s rugby, volleyball and soccer teams prepare for their respective fall seasons. Many have their eyes on a league title – whether it’s hoping for a treble or their first-ever championship – and have shared that their teams’ tight-knit cultures will allow them to excel. Here are some of Dartmouth’s most promising squads for the upcoming season, with a look at their preparation and how you can see them in action.

“We’re all really excited, incredibly engaged and we all really care about what other people are doing,” Velikonja said. “It will be difficult, but I think we have a great chance of getting there.”

Velikonja said most of the men’s cross country will come back from last year except for their freshmen – an advantage that could help the team achieve both goals.

Last season, men’s cross finished eighth at the NCAA Northeast Regional Meet, where the five student-athletes competing for Dartmouth finished within 41 seconds of each other. Additionally, in the Ivy League Heptagonal Championship, Dartmouth moved up three places from eighth place in 2019, claiming fifth place. Meanwhile, women’s cross finished sixth place at Heps and 11th at the NCAA Northeast Regional Championship in Boston, with Corrine Robitaille 23 leading the way for the Big Green placing 16th and 28th respectively.

“As a team, I think we can do much better in Heps than we have in the past,” Fenerty said.

Both Men’s and Women’s the cross country will play its season opener at the Vermont Invite on Sept. 3 at the University of Vermont in Burlington, Vermont.

This season, captains quarterback Nick Howard ’23, safety Quinten Arello ’23 and defensive end Shane Cokes ’23 will lead the 2022 football team, which welcomes 23 new recruits, to defend its back to back Ivy League Championship titles.

Wide receiver Paxton Scott ’24 said that in season the team trains at least 20 hours a week. Scott said the team’s primary goal was to win the Ivy League Championship, although he also noted that, like every year, members of the upper class hoped to act as mentors for the incoming players.

Scott added that watching older players take underclassmen under their wings inspired his desire to take on a bigger leadership role this year and try to make first-team All-Ivy.

“The next step is to help other team members prepare for the season and the games,” Scott said. “We have a ton of talent in every position, and [we have a goal] to perform to the best of our abilities each week.

soccer goes to start up the 2022 season against Valparaiso University at Memorial Field on Saturday, September 17.

Dartmouth Women’s Rugby will start the season with high hopes as the most recent winners of the NIRA National Championship, defeat Army West Point 28-18 last fall. The Big Green is looking to defend their national title.

“We definitely have a huge target on our backs at the moment, and we’re losing a few players, but we’re also gaining a lot,” said squad member Anjali Pant ’24. “We just try to keep the ball rolling, stay on top of things and keep crushing it.”

Under pressure, Pant said she liked to remember the team’s slogan: “with you”.

Women’s rugby will play its first match on September 1 against Long Island University at home to Brophy Field.

The volleyball team finished the 2021 season with a fourth place in the Ivy League – an improvement from the team’s record in recent years of finishing in the bottom half of the league standings. According to co-captain Ellie Blain ’24, the team is looking for more.

“Our long-term goal is definitely to win our first-ever Ivy League championship, and on that note, to make it to the NCAA Division I Tournament as well,” she said.

Blain said she believes one of her team’s greatest strengths is their sense of trust and closeness to each other – something she says they plan to build on this coming season. .

“I think because we’re so close, it really helps us on the court to know that we can trust each other,” Blain said. “If each teammate does an individual part of the puzzle piece, we know it will be fine.”

Dartmouth Volleyball will begin its season at the University of California at Irvine on September 2. The Big Green will face Sacred Heart University, College of the Holy Cross and UC Irvine in the tournament.

“In football it’s either about playing straight transitions, super fast games or more of a technical possession style, where you keep the ball and your best defense is attack,” Granholm said. “I think we’re just trying to define ourselves as a team and where we fit on that spectrum.”

Women’s football will be open The Ivy League will play Brown University on September 24 in Hannover. Granholm, who will be playing for the first time since suffering an ACL injury last season, said she hopes the students will show up to support the team when they open the season.

Cade Keesling ’24 of the men’s soccer team said he is looking forward to their first game of the Ivy League against Princeton University on October 1 at Burnham Field in Hanover. Last season the team lost at Princeton in overtime after leveling the game in the second half. Keesling said in particular the team hopes to improve the conversion of scoring opportunities.

“I know that last year a lot of our games ended in one or two goals, and if we had ended our chances, the season could have been completely different,” Keesling said. “We could have almost been undefeated.

While only time will tell what these teams will accomplish, many student-athletes enter the fall season with high hopes and a commitment to supporting each other on and off the field.