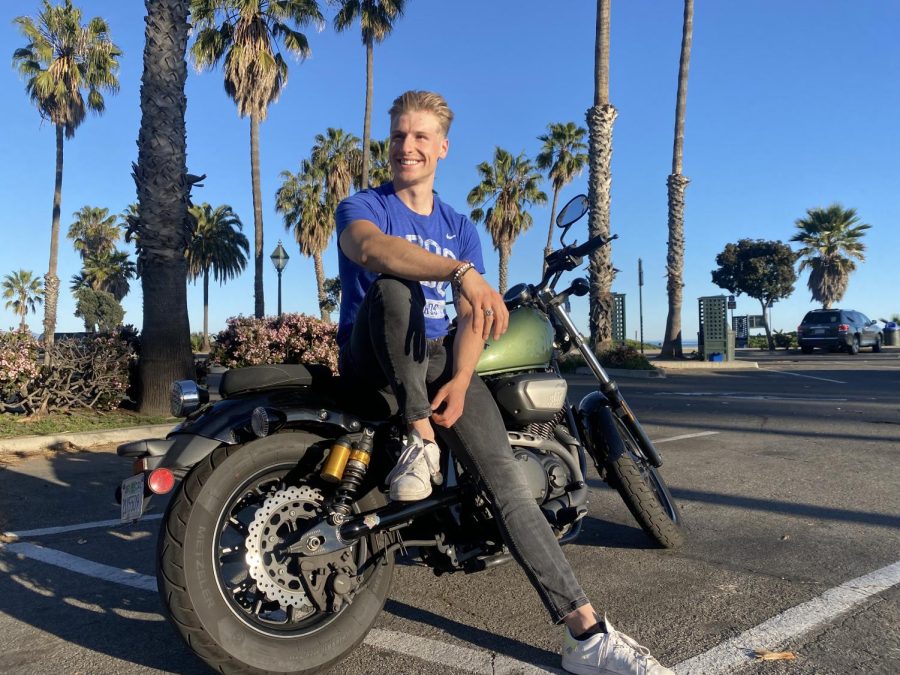 Coming to school on his military-green motorbike that took a few bumps, City College student Jan Kamillo Kreitzberg pursued his dream of studying in the United States.

Motorcycles are some of the fastest vehicles on the road and are known for their thrill and the adrenaline rush that comes with it.

“I know it’s scary, but at the same time you feel so alive because you have to be so focused and present,” Kreitzberg said. “Take life. It’s a nice feeling.

Kamillo was introduced to motorcycles at a young age by his father Arne and started riding with him around Solingen, Germany.

“My father, my grandmother and even my great-grandmother had a motorcycle license,” Kreitzberg said.

Kamillo’s parents had built roots in California, and he remembers at age 12 the feeling of landing in the Golden State.

“Coming here was my number one dream. I remember being here and feeling like I was coming home,” he said.

After high school, Kreitzberg knew his next adventure would be in the United States.

While visiting his mother’s foster home in Victorville, Kamillo came across the mode of transportation that has been in his family for generations.

“I was walking around different garage sales when I came across this guy who started talking about motorcycles,” he said.

A little conversation and a price he couldn’t refuse later, he had bought a motorcycle.

Kreitzberg was one step closer to his American dream until COVID-19 intervened and forced him to return to Germany.

Yet he refused to give up on his dream of studying in the United States. The American Institute for Foreign Study helped him find his way back home by introducing him to City College.

“I applied to this one school in California, the place I wanted to be,” he said.

When he received his letter of acceptance, Kreitzberg felt that the difficulties were finally coming to an end.

“I freaked out. I was the happiest guy.

Back in the United States, he first thought of getting back on his motorcycle, he missed the freedom and thrills. After reuniting with his bike, he took off and headed for his new home on the coast.

Late at night, when the ocean fog was thick, Kreitzberg drove to the Santa Barbara site unseen, ready to start his next chapter at age 23.

“I had so many setbacks, but my spirit was still there. Doing it was one of the most important life lessons I had.

As a City College student, Kreitzberg finds the freedom to ride a bike and take study breaks at the beach.

A motorbike also means another kind of “free” when it comes to managing parking at City College.

“Parking permits aren’t required for motorcycles, but there are certain areas where they can and can’t park,” campus security director Erik Fricke said. “There are designated parking areas such as the upper part of lot 2-A, [a] concrete slab in lot 3 and in some rutted areas of 5-2, 5-3 and 5-4 of the parking structure. »

Kreitzberg studied business and plans to go to a four-year college for the next step in her American college journey.

“It’s really worth saying yes and not expecting anything. If you have a positive mindset, it will be a good time,” he said.