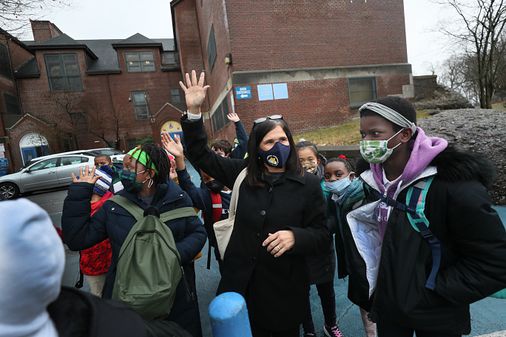 Months before her own departure from Boston Public Schools, Superintendent Brenda Cassellius warned that local and state teacher shortages were hurting children and called for state and federal solutions in an op-ed for The Washington Post.

The article, published just days after Cassellius announced that she would be stepping down from the lead role of BPS, said that staff shortages, especially among teachers, have increased in recent years.

“As we enter the third year of the pandemic, America’s public schools risk failing in their moral obligation to millions of children,” she wrote.

Cassellius pointed to a 20% vacancy in BPS’ food service department since the summer, daily shortages of bus monitors and drivers, and his own need to step in to replace teaching when more than 1 000 staff were missing as local examples of what schools around the country are facing.

“And that’s on top of teacher and other staff absences that can erode children’s learning experiences,” she wrote.

Staffing shortages have been one of many issues that have plagued Cassellius’ tenure, which began in 2019 and will end at the end of the academic year in June.

Cassellius also noted that nationally, fewer college graduates are choosing teaching and that a third of current teachers plan to leave their jobs early.

“Previously seen as a stable career that had the potential to have a significant positive impact on a community, teaching can no longer compete with positions offering more flexibility and higher pay,” Cassellius wrote.

“To avoid a mass exodus of burnt-out educators,” Cassellius recommended offering retention bonuses, writing that “American teachers have weathered some of the worst logistical and cultural battles of COVID-19, and they have earned this recognition. “.

She also argued that the federal government must step in to create solutions. She suggested the government should offer free tuition to students who are committed to teaching in public systems and loan forgiveness to teachers who have been in the profession for at least 10 years.

“Let’s also set a national minimum starting salary for teachers of $75,000 a year,” she wrote. “And let’s eliminate fees for teacher licenses, testing and fingerprinting.”

Instead of allowing states to set standards and administer teaching licenses, Cassellius called on the U.S. Department of Education to create a uniform system that would set high national standards. A national licensing system would also allow teachers to move from state to state without having to retake exams, which are different across the country. (Cassellius let his own license lapse for a short time last year after failing to pass the state licensing exam after moving to Massachusetts from Minnesota.)

“Our teachers and other staff need help, but most importantly, our students are counting on us,” Cassellius wrote. “They are lucky to have a solid education. For their sake, we must chart a path forward that attracts more people to careers in education and keeps great teachers in the classroom.

Colleen Cronin can be reached at colleen.cronin@globe.com.